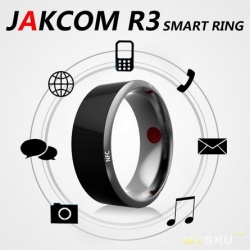 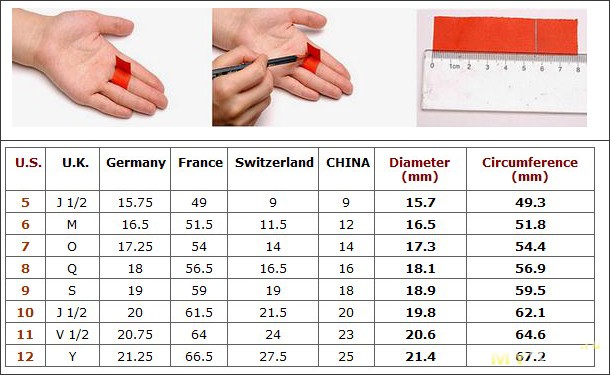 The developer of the gadget is the Chinese company Jakcom.
Link to the official page www.jakcom.com/R3_eng.html
The recommended price of the ring is $19 (at the time of purchase on May 19, 2016, the price with a coupon was 1270 rubles, delivery ~ 2 weeks, shipping from Turkey, international track is present ).
The R3 model is the oldest and most advanced in the line of Jakcom smart rings. In addition to R3, there is a simplified version of R3F and an even simpler version of MJ02 (such a ring in a white and gold version is also in the household).
Jakcom R3, unlike the younger models, is available in a single color version. The size of the rings is indicated according to the US standard, from 7 to 12, the corresponding sizes in the standards of other countries and the measurement method:

The ring comes in a transparent plastic box with dust jacket. The bottom side shows the production date, model name and size in English and Chinese. Inside the box, the ring is held in place by a foamed polymer. A ribbon is laid along the contour, where the name of the publication is repeated and QR codes are printed with links to the instructions and to the manufacturer’s website.

The shank of the ring is made of polished titanium with ribs coated with tungsten carbide. The material is very hard and hypoallergenic. The inner side of the shank is convex: in the central part, the clearance is narrower than the edges by about 2 mm. On the inside of the shank, the logo and the name of the company are knurled, on one of the sides of the shank, sensory zones are applied by laser engraving: “at 12 o’clock” – ID, “at 9 o’clock” – NFC, “at 3 o’clock” – M1.

Plus, inserts are pressed on the inside of the shank: the ID tag has a “magic FIR stone created using Korean nanotechnology from natural components”, the M1 tag has an insert “from the rare earth element germanium”, the NFC tag has an insert “made of natural volcanic magnet” (in brackets I give a translation from the official description). 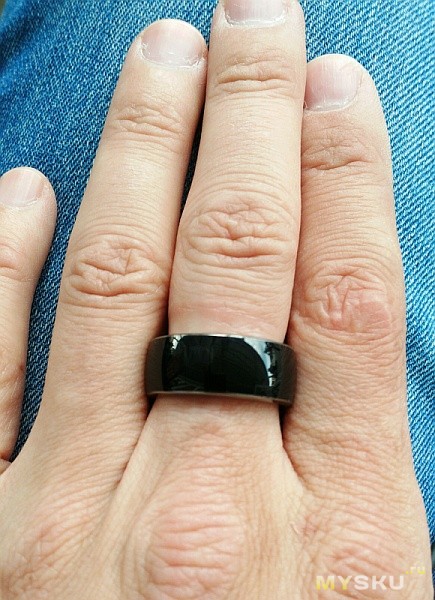 The inserts are convex, 2.5mm in diameter and protrude above the surface of the shank by about 0.5mm. That is, in the three zones of the ring, the clearance is even narrower. The "Magic FIR Stone" is not really a stone, but an elastic composite – when pressed with a fingernail, a dent remains, which quickly disappears.
It looks like this on the finger (I have a size 8, but the fingers themselves are thin, so they look rather thick)

The electronic filling of the ring is "stacked" from the outside inside the shank, filled with a glass-like black compound, molded to a slightly convex state and polished. The compound is not particularly hard, and when worn, scratches and scuffs remain on it.
The ring has IP68 protection, does not contain power sources and can withstand temperatures from -50 to 80C. Declared write speed up to 106KB / sec, up to 100 thousand rewrite cycles and storage life of recorded data up to 10 years.

The advertisements and commercials promise protection from radio wave radiation, saturation with useful negative ions, improved blood circulation, body cleansing, increased energy, endurance and stamina, prolongation of coitus and other nonsense. Believe it or not.

The ring contains an NXP dual-core NFC chip that emulates the operation of read-only and rewritable ID and IC FRID cards with carrier frequencies of 125KHz (EM, TI, HID) and 13.56MHz (Mifare S50 M1, Fudan F08).
To use this functionality, you need an original key (card) and a reader of the appropriate standard. The procedure is simple: read the identifier from the original, write it to the ring. Initially, the ring does not contain any identifiers (the so-called "dummy").
Recording and reading of read-only tags is carried out in the zone marked with the “ID” tag, writing and reading of rewritable tags is carried out in the zone marked with the “M1” tag.
There is a nuance: due to the small size of the antenna built into the ring, the actuation distance of the key is reduced to about 1-1.5cm. Recognition lasts 1.5-2 seconds longer than a standard card (compared with a regular business card key on the same readers). On some crooked readers, you have to move your hand slightly in front of the false panel for optimal antenna alignment.
I have a 1-wire intercom key, I have not tried to copy a travel card, I do not have contactless parking cards, I have seen an elevator with an RFID key blocking a couple of times. But all this is supposedly also supported.
I copied the pass with a reader (ID card 125KHz) – everything works without problems.